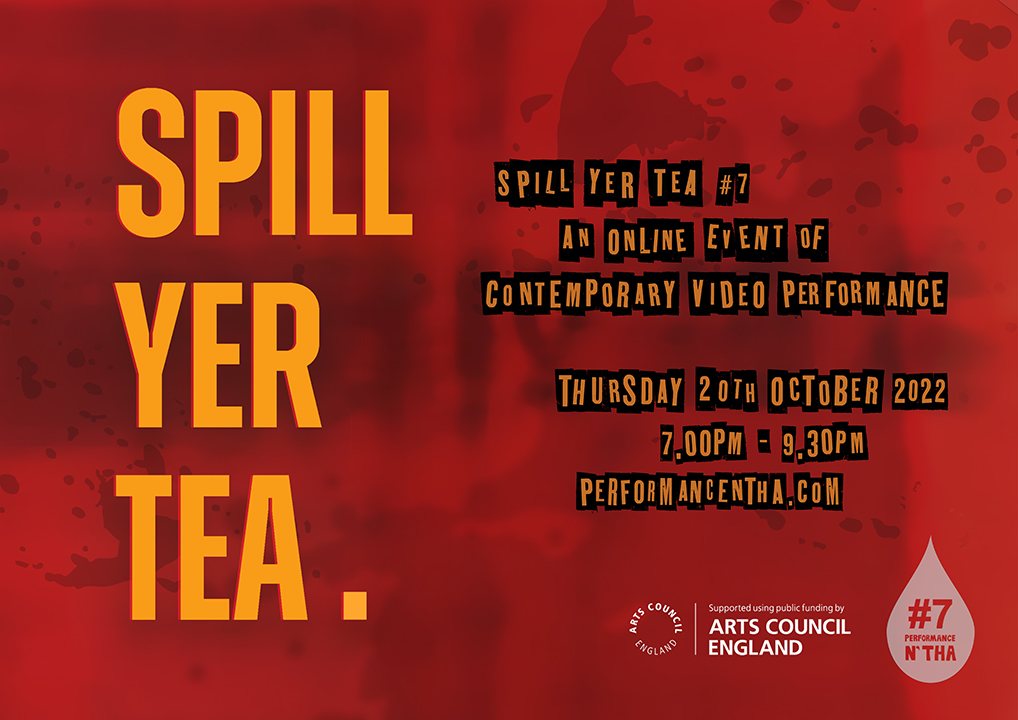 The seventh edition of SPILL YER TEA by Performance N’ Tha was presented online.  The event, which was funded by Arts Council England presented an array of ground-breaking contemporary video performances from a selection of critically acclaimed performance artists from across the world. 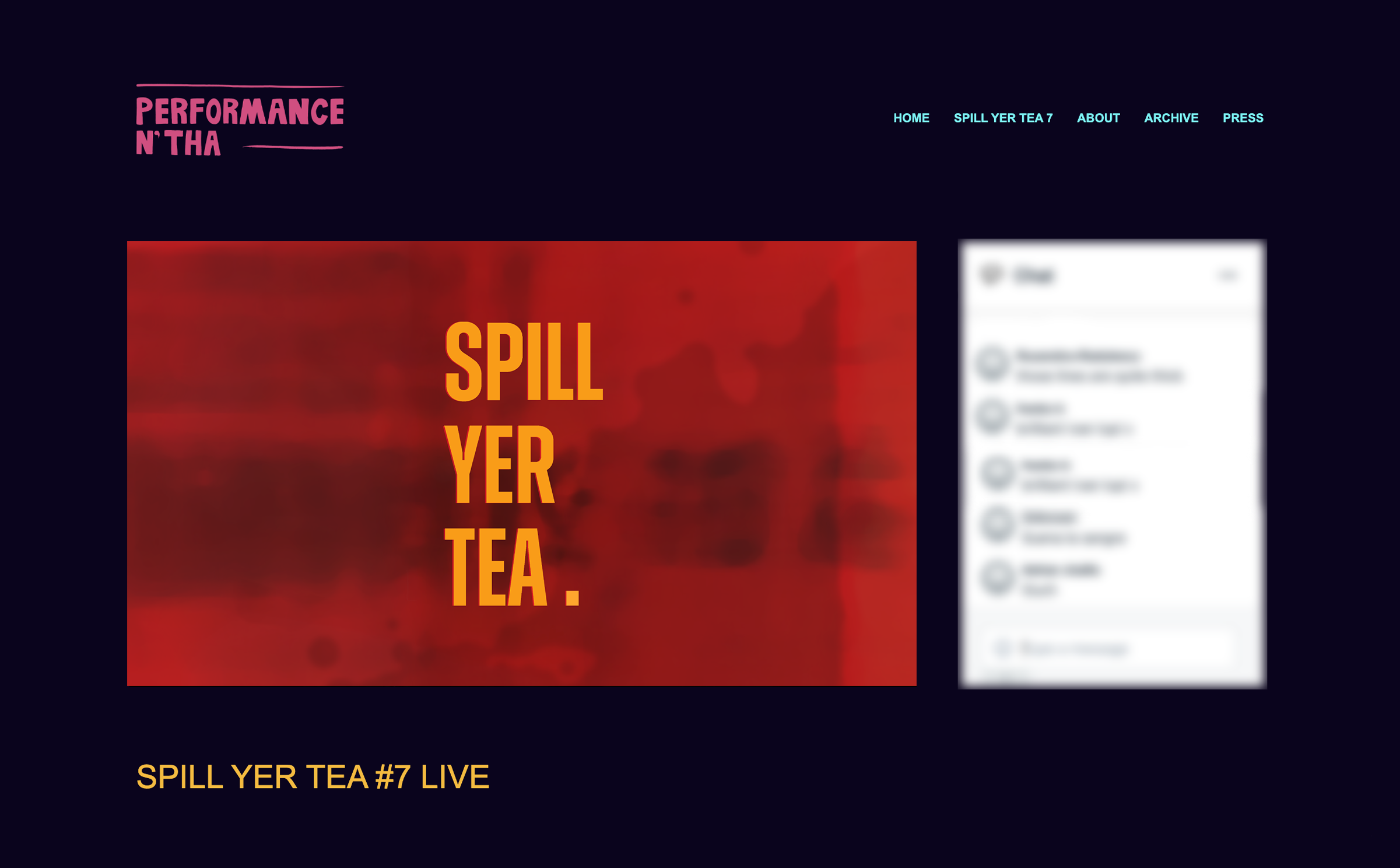 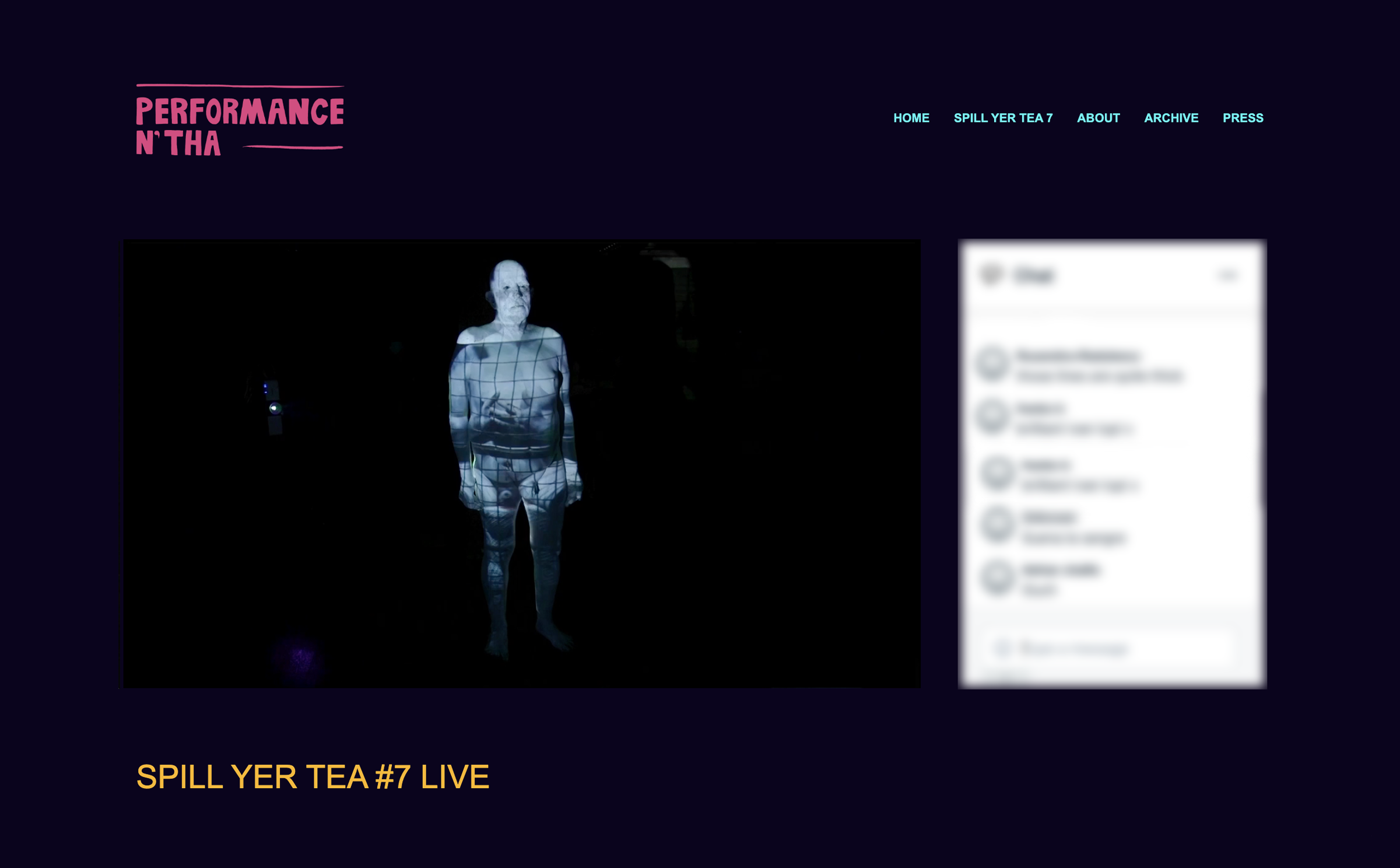 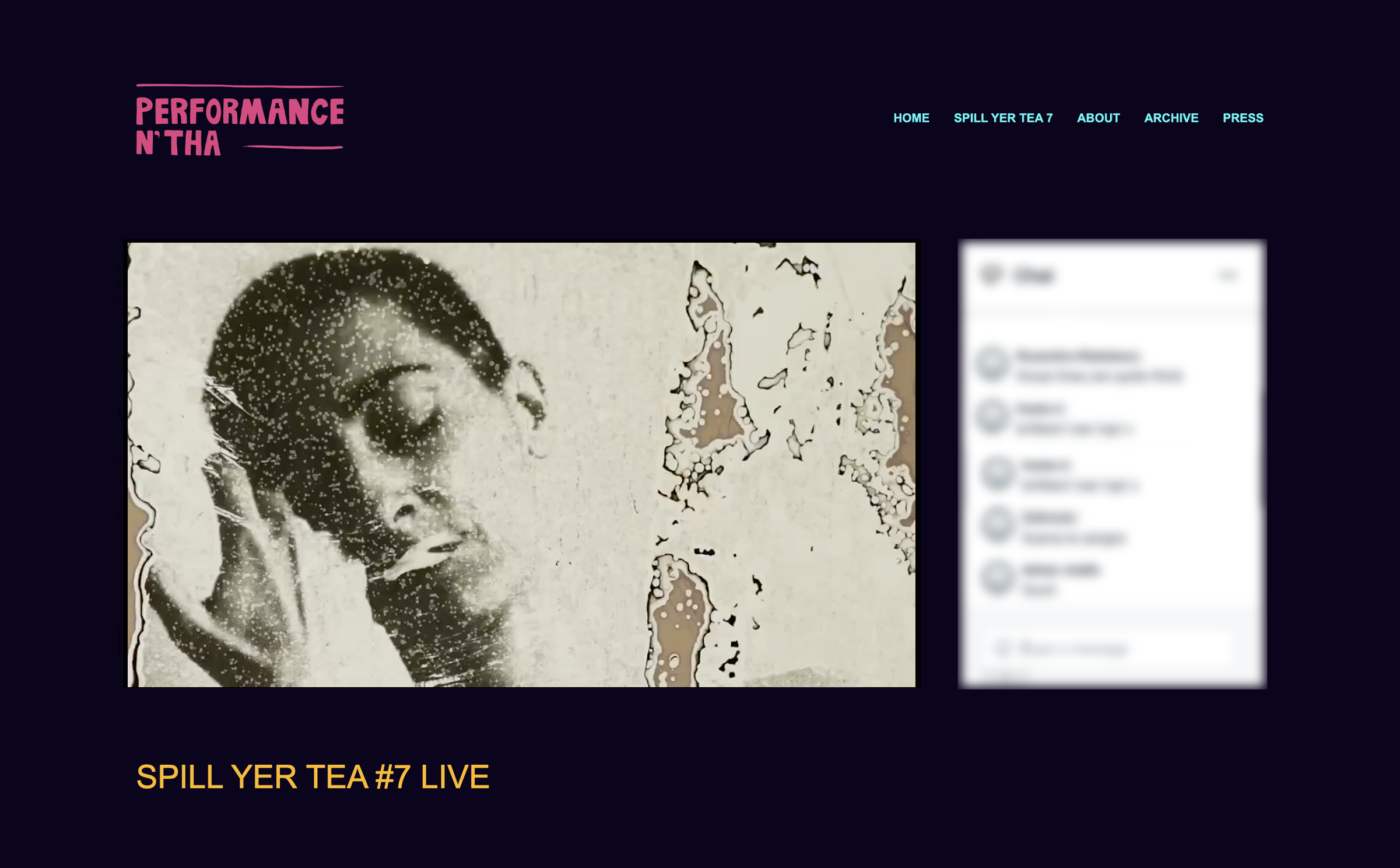 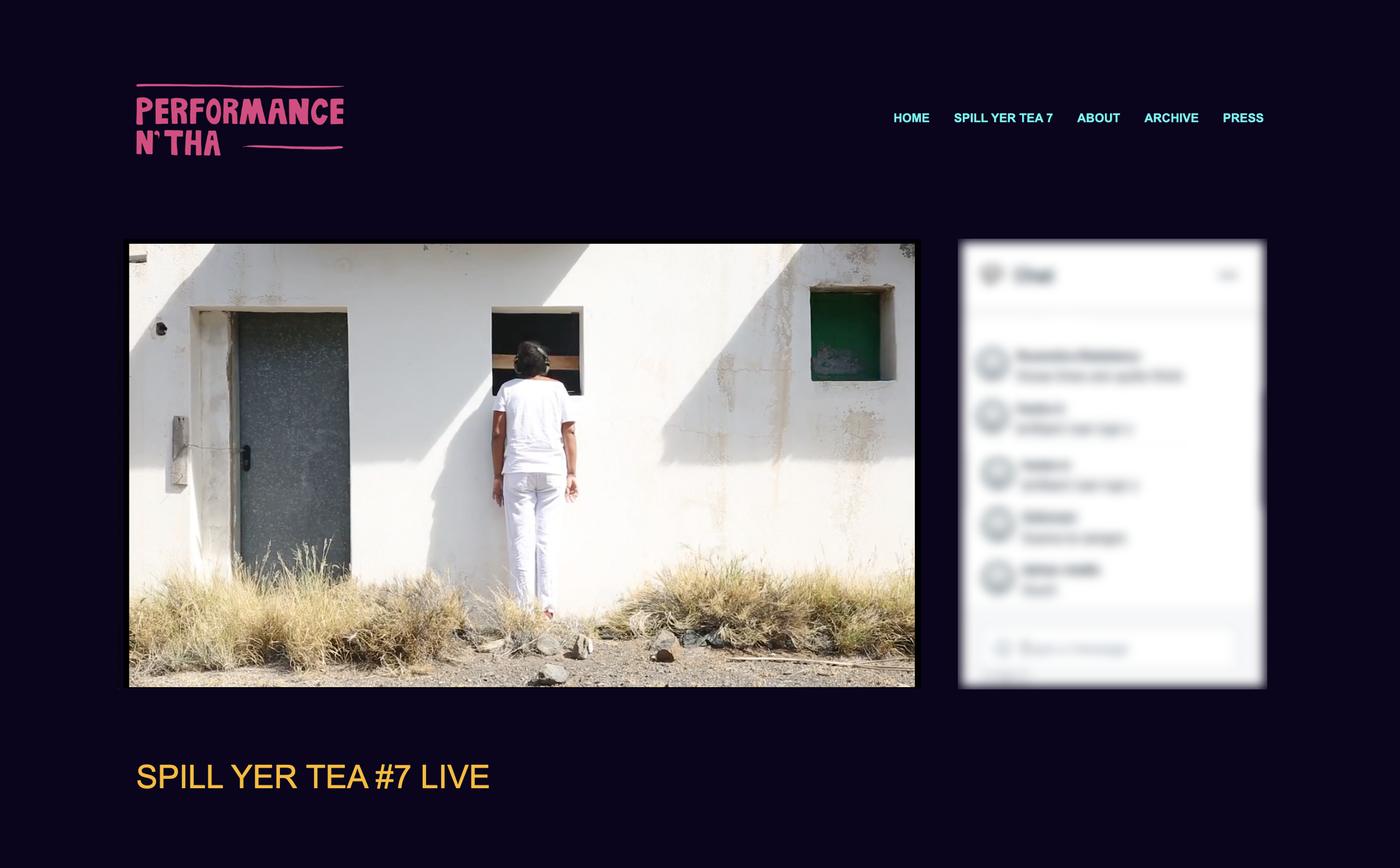 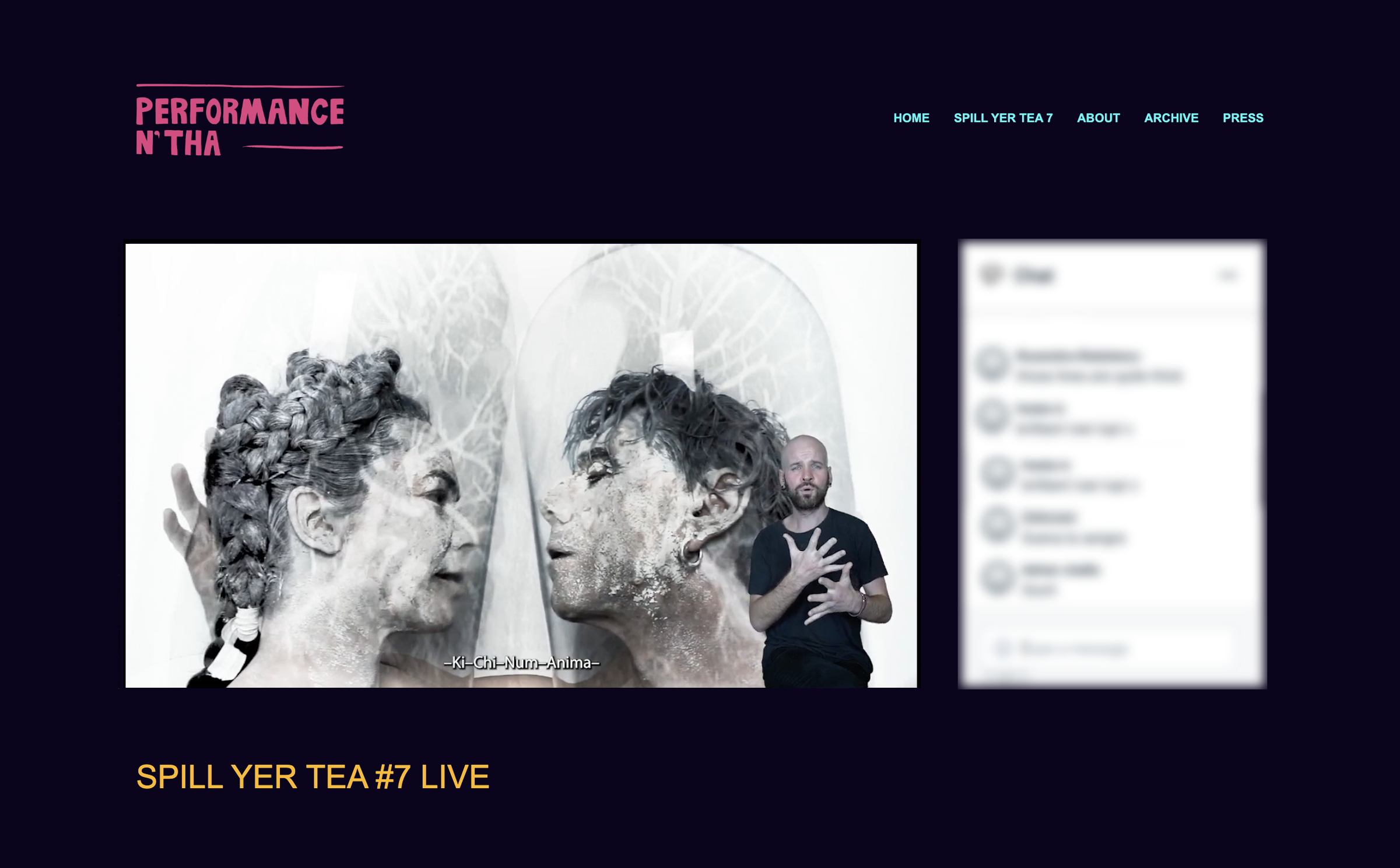 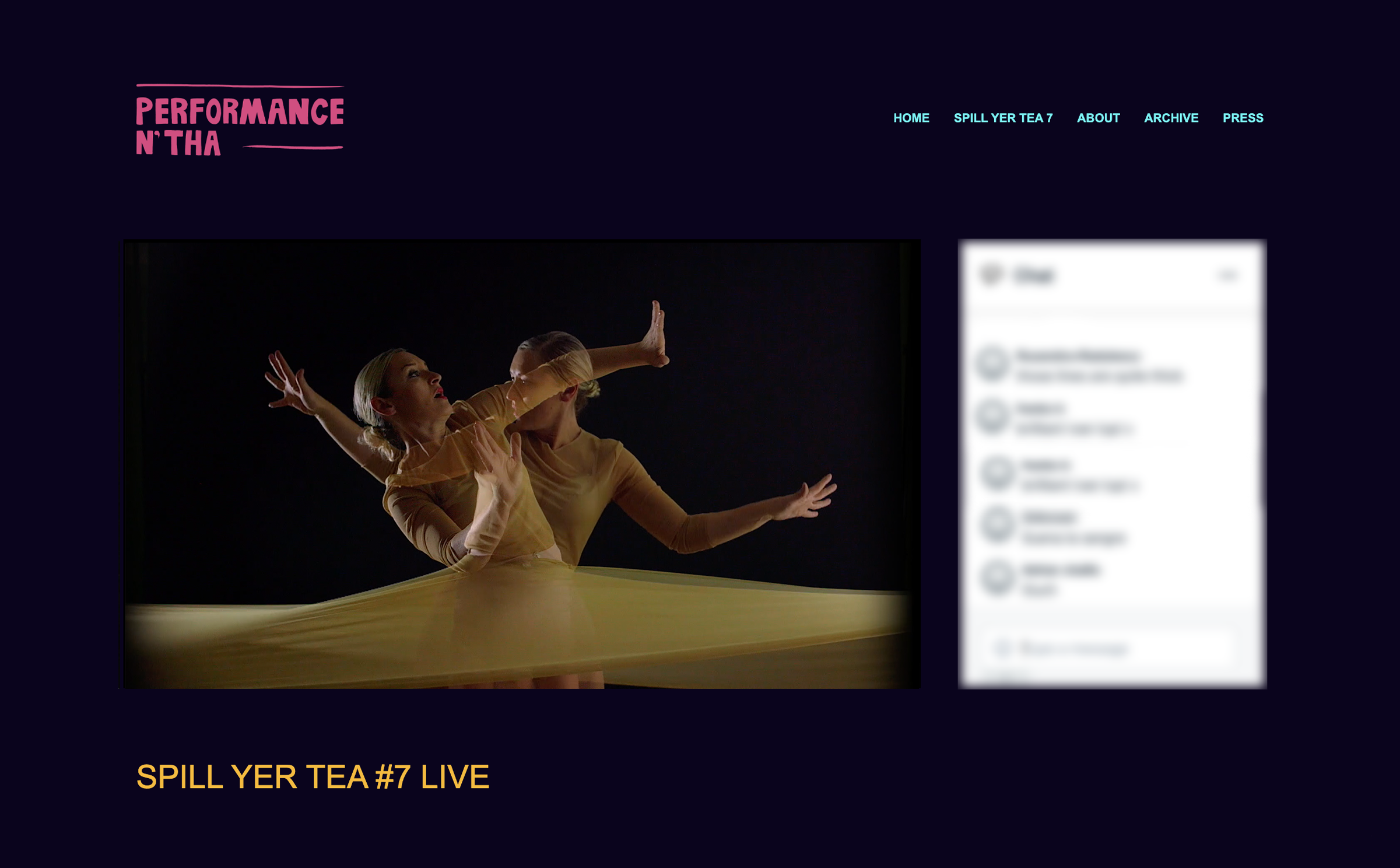 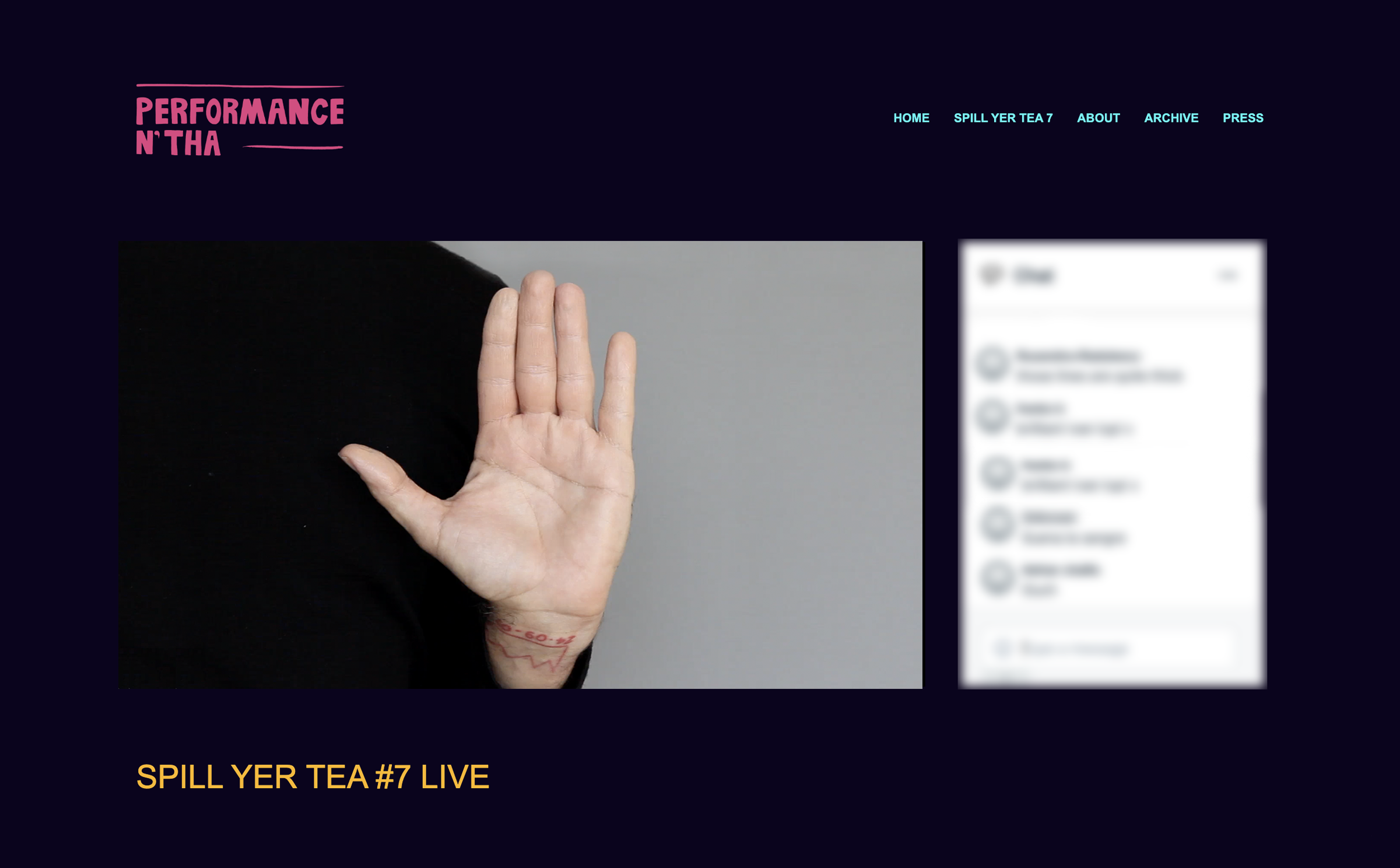 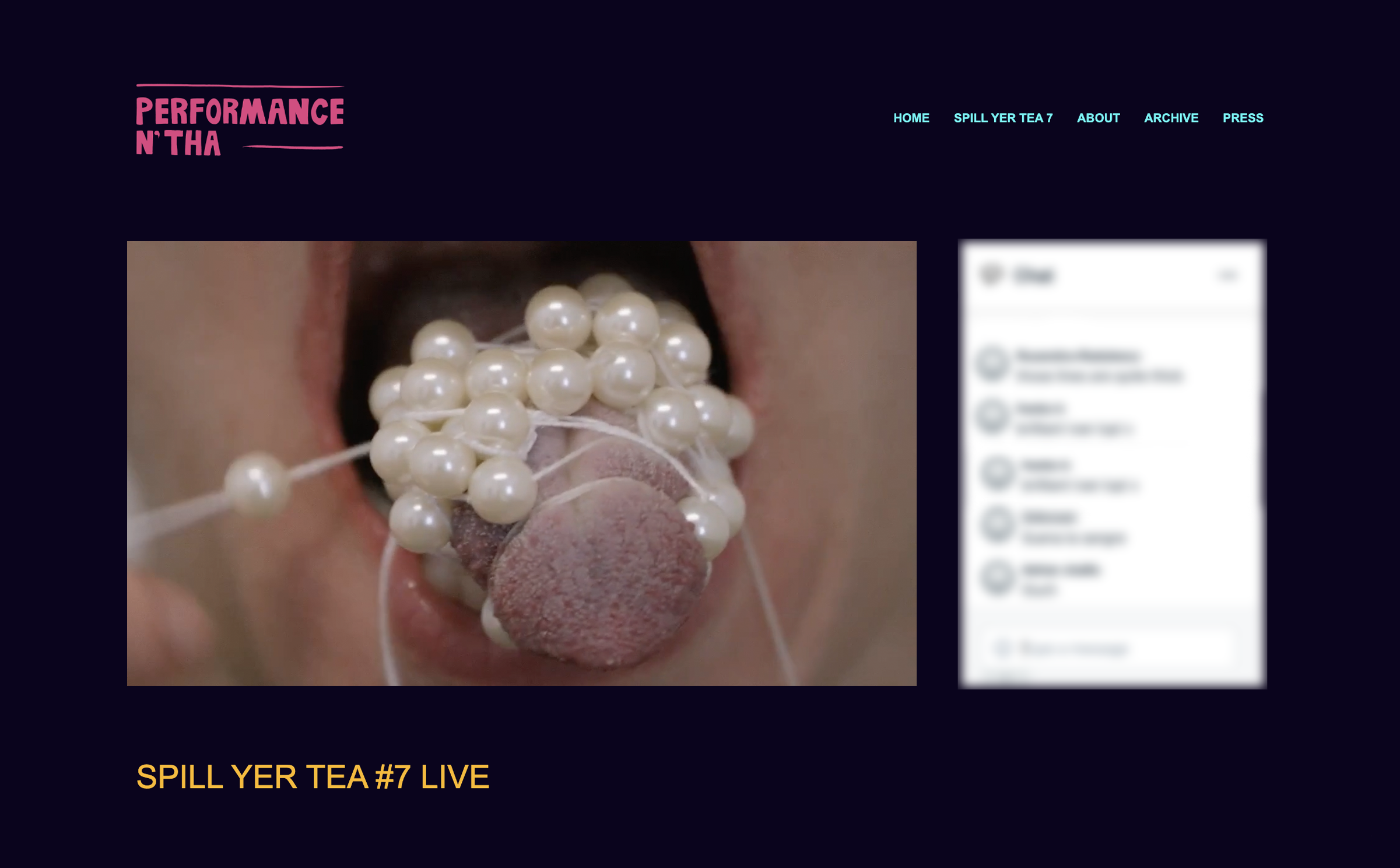 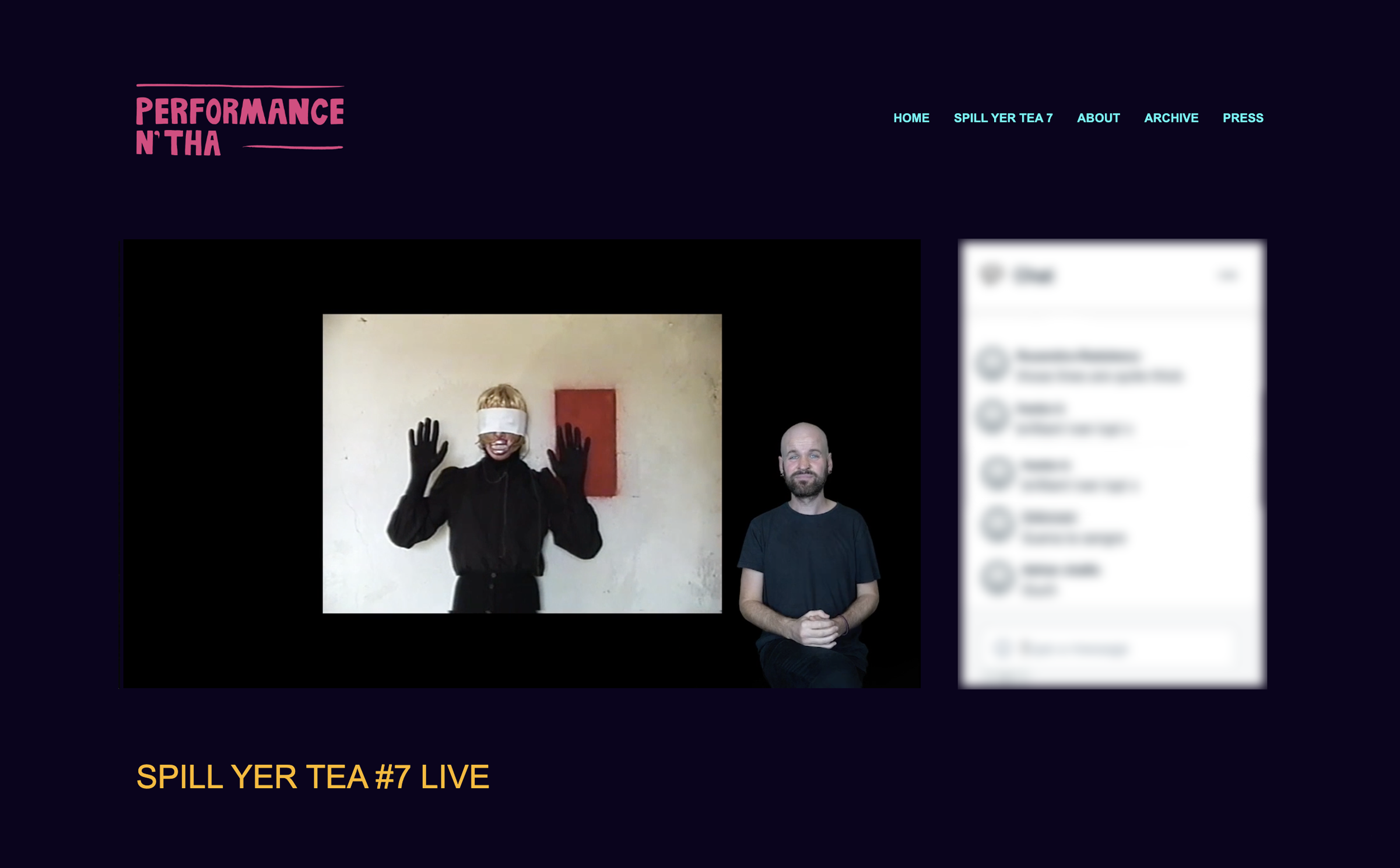 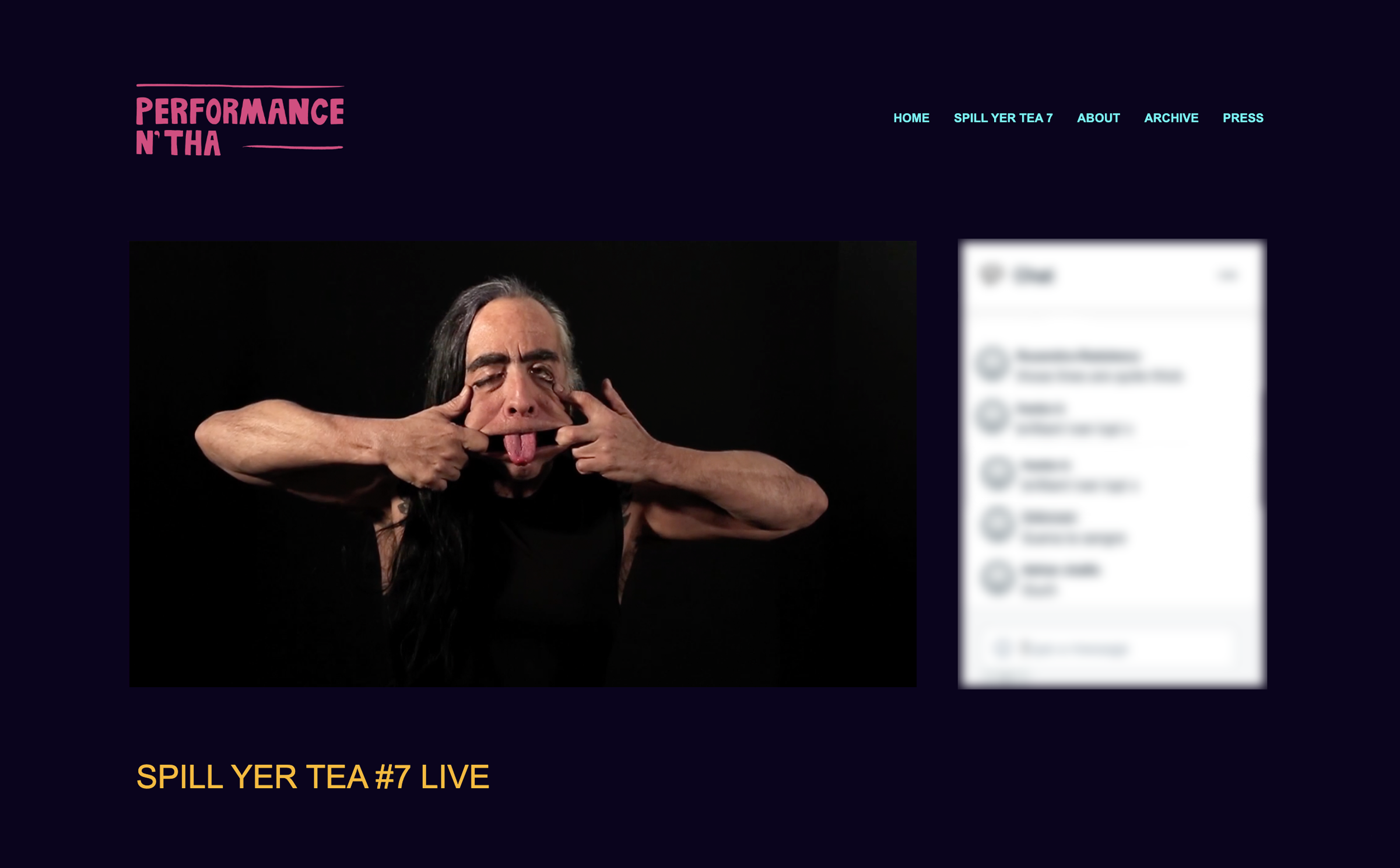 I’m here brings together moving and still images from the past 30 years of Franko’s life, revealing the personal and “a product” of this world to the audience. The work also compiles images from the internet, both moving and still over a two year period showcasing “all of the shit of the world”. Born in Milan, Italy in 1960 Franko B makes drawings, installations, sculptures and Performances, as well as works in many other disciplines. Franko B rose to prominence in the 1990s due to his extraordinary body-based performances that often involved blood-letting, Franko’s work has been performed at the ICA, London, throughout the UK and internationally.

This work is the third excerpt from the ongoing experimental film project “50.000 TOUCHES” (2022-) on the poetics of love, intimacy and touch in relation to self and other, through the means of alternative image making, performance for/with camera, and animation. Fenia’s cross-disciplinary, process-driven, hybrid and rhizomatic practice, draws upon the notion of the body in performance through queer and feminist lenses, interrogating the de/re/construction of fe/male identity, modes of (self)representation and the politics of the gaze-d body captured through the lenses of the camera. Often she is going back to old alternative photographic processes, as a way to question moving and still image within the frenetic visual culture we live in, whilst using  them as a strategy to explore failures and potentialities within the medium itself.

Ghost Voices is an action based research on the body as a polyphonic channel capable of accessing infinite layers of time and connecting human and non-human memories. If the past is diluted in everything between and beyond us, would it not always belong to what we call the present? If so, I want to learn to talk to the ghosts. Rubiane Maia is a Brazilian transdisciplinary artist based in Folkestone. She is interested in the body, voice, memory, phenomena and organic matter. She usually develops her research in site specific contexts, always considering the landscape and the environment as guides and co-creators of her art practices.

“AMOR AND PSYCHE (In Times of Plagues)” is an itinerary into the radiographic inner portraits of the artists to look at the limits of the biological body, with breath as the element crossing the inner-outside border. It is an exercise in comprehending the importance of one’s vital force, the gravity of which extorts itself when faced with its imminent loss. VestAndPage are Verena Stenke and Andrea Pagnes, who work in performance art, filmmaking and temporary artistic community projects worldwide as producers, researchers, curators and mentors.

Beginning life as a “translation” of the 4th movement of Beethoven’s 7th Symphony – this performance to camera becomes a Janus. Language and communication are at the heart of much of Coogan’s work and it is this face off between the aural and the embodied that Prologue explores. Critically acclaimed for her ability to condense an idea to its very essence and communicate it through her body. Coogan is an internationally recognised and critically acclaimed artist working across the medias of live art, performance, sculpture and installation. The body, as a site of resistance, is the centrality of Coogan’s work.

A ‘Salut’ and acknowledgement to all humans living with HIV globally.

Ivan Lupi was born in 1972 in Ferrara, Italy and currently resides in New Zealand. Lupi who has a Masters in Queer Studies in Arts and Culture from the Birmingham University has presented work widely including Switzerland, Lithuania, United States, India, South Africa, Canada and New Zealand. The most relevant events: ‘The Voice and the Lens’ – Whitechapel Art Gallery (London 2014), ‘The Slip of the Tongue’ – Palazzo Grassi Punta della Dogana (Venice 2015). Other credits include ‘Performance Arcade’ (Wellington 2019), ‘Towards the forest’ – The Vivian gallery (Matakana 2019), ‘WTF!?’ – Museum of Transport and Technology (Auckland 2019).

pearl-tongue is a live-work to camera that explores difficult interfamilial relationships through a family heirloom of imitation pearls given to the artist by their grandmother. The film explores an intensely personal transformation through the vernacular and memory of an object whilst questioning the internalised misogyny handed down to them through maternal generations.  Shot as a live performance by JJRolfe in London, 2015. selina bonelli is a visual artist currently exploring the failure of the document in performance art and it’s relationship to the failure of language to articulate traumatic experiences, through post conflict, abandoned architectural structures left in the landscape.

Sapling is a collage of nonconformism. The work, which has been compiled from interviews with sex workers presents a surreal, psychedelic and provocative work between traditions and total anarchy – crossing the path of houses, religion, childhood-songs and MILK. The work, which explores biographies, memories, thoughts, hopes and dreams is at times brutal and violent but shines optimism. Shalva Nikvashvili (b.1990, Sighnaghi) lives and works in Germany. Nikvashvili’s practice looks at identity issues through transgressive takes on idiosyncrasy, visual explorations and modiﬁcations applied to a portrait. Nikvashvili has recently showed his work at OPYUM Video Performance Festival, Paris, 2020; Young Friends of Smak at SMAK, Gent, 2021; AIR-Antwerp Art week, Antwerp, 2021; En Vous Remerciant, Bordeaux, 2021.

Dancing with Fear Part One: Mirror Dance is a collaborative performance film in progress by Guillermo Gómez-Peña and La Pocha Nostra. Video by Zen Cohen. The complete series of 6 video performances deal with Body Politics, The Aging Body, Fear of Illness, Love Gone Wrong, US/Mexico relations and the tensions between performance art and the mainstream. Guillermo Gómez-Peña is a performance artist, writer, activist, radical pedagogue and artistic director of the performance troupe La Pocha Nostra. Born in Mexico City, he moved to the US in 1978, and since 1995, his three homes have been San Francisco, Mexico City and the “road”. His performance work and 21 books have contributed to the debates on cultural, generational, and gender diversity, border culture and North-South relations. His artwork has been presented at over one thousand venues across the US, Canada, Latin America, Europe, Russia, South Africa and Australia.

Performance N’ Tha is committed to supporting local initiatives who deliver important work in enhancing accessibility and opportunity for marginalised communities to engage with services.

Performance N Tha donated £95.00 to support the charity with their ongoing work.

SPILL YER TEA #7 was made accessible to Deaf and Hard of Hearing audiences. The event was interpreted into British Sign Language (BSL) and contained Closed Captions.